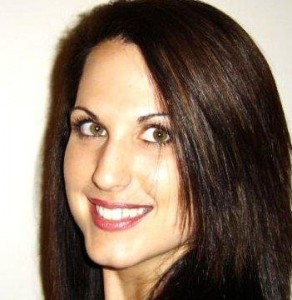 I started doing hair in 2009 – I have always had a passion for hair, and I was excited to begin a new career at age 35. But now I feel like I have to choose between a career I love, and my health, and that’s really disheartening. That’s why I’m so glad I had the opportunity to go to Washington D.C. for the Healthy Salon Week of Action to tell my story about how Brazilian Blowout has altered my life forever.

I started doing Brazilian Blowouts in 2011 as a faster way to get on the floor of my salon as a new stylist in New York City. I swore by the treatments for my own coarse, frizzy hair, and couldn’t wait to do them on clients. I often was doing Brazilian Blowouts on 3-4 clients a day. Our salon was small, and at least 2 other stylists would be doing them, too. There was an extremely high demand for these treatments. In the 9 months I did Brazilian Blowouts, my health steadily went downhill.  I developed chronic sinus and respiratory infections that got so bad that I couldn’t sleep and gasped for air. Painful blisters showed up in my nose consistently. I am a runner, but I was constantly short of breath and I had heart palpitations.  Even now, months later, I use an inhaler often before a run.

I knew there was some formaldehyde in the product, but like so many people, I assumed that it would be banned if it were toxic, and that the FDA would be protecting me.

But I was wrong. That’s one of the reasons I went to D.C. last week – I was in denial for so long that it was the Brazilian Blowout treatments making me sick. And so many stylists and clients alike think like I did—that the product must be safe if it’s allowed on the market.

So I went to D.C. with 14 other salon workers last week to tell our stories in hopes of making change. We split up into groups and went to meetings on Capitol Hill with Congressional representatives.

It was the first time I’ve spoken to my elected officials, and I really didn’t know what to expect. I had at most sent letters, but you never know who’s even going to read them. I can’t help but be passionate about something that’s affected my life so much.
To tell your personal story in front of someone who can make a difference, who actually has the power to do something about it, is really empowering. And we convinced three representatives to co-sponsor the bill!

After the Hill visits, we attended a meeting with the FDA, OSHA, NIOSH, and the White House Cabinet Secretary, Christopher Liu. Jennifer Arce spoke on behalf of us stylists at that meeting, and what struck me most, as she was telling her story, was that Christopher Liu was just horrified. His face said it all. That really gave me hope. If someone that powerful can hear our stories and be that affected, then we have the power to really make change.  That is my hope, more than anything.

I was so proud and grateful to get to go to D.C. to raise my voice for safe salons. The National Healthy Nail and Beauty Salon Alliance is power in numbers. And I just represent one of many – whether it’s a stylist, a nail salon worker, or a client who’s been affected by toxic chemicals – it could be any of us.

As a group, there’s so much potential to change these outdated laws that have been in place for so long, that do nothing to protect us. I think we made a powerful impact by putting a face to the ugly side of the beauty business. I really feel like we made a difference. Wait, what? – now there are phthalates in tampons and pads too?