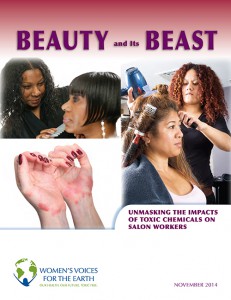 Unmasking the Impacts of Toxic Chemicals on Salon Workers

Salons can be a hazardous place to work given that many harmful chemicals can be found in salon products. The predominantly female workforce in hair and nail salons are exposed to these chemicals for many hours at a time on a daily basis. Research shows that this exposure can harm a salon worker’s health.

Salon workers deserve better. The creation of safer products, better laws, and the use of best practices in salons can significantly reduce the health problems experienced by women working in salons.

How are salon workers exposed to toxic chemicals?

What are some of the problem chemicals found in salons?

Harmful and irritating chemicals such as acetone, toluene, ammonia, and methyl methacrylate are commonly found in salon air. Levels are particularly high in salons with little or no ventilation.

Cancer-causing formaldehyde can be released from hair straighteners and flat iron sprays when used with high heat.

What does medical research say about health effects experienced by salon workers?

Some surveys found that over 60% of salon workers suffer from skin conditions, such as dermatitis, on their hands. These conditions often start during cosmetology school or other salon work training.

Studies have measured decreased lung function in both hairdressers and nail salon workers. Both groups also have higher risks of developing asthma.

Hairdressers and cosmetologists may be more likely to give birth to low birth weight babies, especially when their work involves using hairspray and permanent waves. Studies of hairdressers have also found an increased risk of miscarriage and babies born with cleft palates and other birth defects.

Studies have found increased risks of several types of cancer, including breast cancer, lung cancer, cancer of the larynx, bladder cancer, and multiple myeloma, in hairdressers.

Cosmetologists surveyed were found to be at higher risk of depression compared to workers in other jobs. The risks were highest for salon workers who had worked longer than 20 years in the industry, those who worked with cleaning products in the salon, and those who texturized hair.

Hairdressers were shown to have greater risks of dying from three neurological conditions: Alzheimer’s disease, presenile dementia, and motor neuron disease, compared to workers in other jobs.

Nail salon workers have greater risk of immune disorders such as lupus and primary biliary cirrhosis compared to workers in other jobs.

What are the recommendations for improving the health of salon workers?

In the long term, salon safety depends on manufacturers creating safer products. Safer salon products should be effective without harming air quality in the salon or causing health effects among workers.

Immediate solutions for salon worker and owners include best practices such as using less toxic products, improved ventilation, use of gloves and masks, and opting out of offering the most toxic or problematic salon services.

More research needs to be done and must include strategies to avoid toxic chemical exposure in a salon, and research to better understand salon worker exposures to harmful chemicals, including collective exposures to multiple chemicals from various sources in the salon.