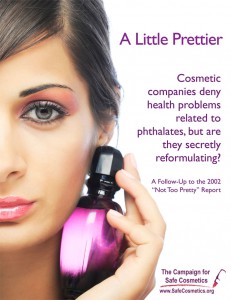 Cosmetic companies deny health problems related to phthalates, but are they secretly reformulating?

Under pressure from consumer advocates and regulators, some leading beauty companies are using fewer toxic chemicals than they did a few years ago, according to tests released in a 2008 report by the Campaign for Safe Cosmetics, A Little Prettier.

The tests, conducted in fall 2008, reveal that at least some segment of the beauty industry has made considerable progress in removing phthalates, a set of industrial chemicals linked to birth defects, asthma, early puberty and decreased sperm counts, according to animal and human studies. However, some companies continue to put high levels of phthalates into their products.

The tests follow up on the 2002 report, Not Too Pretty, which revealed that 72 percent of popular cosmetic products tested – including shampoos, deodorants, fragrances and other products – contained phthalates.