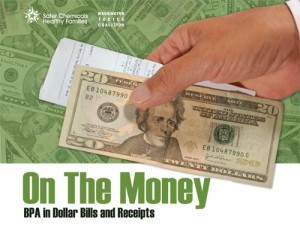 A hormone disrupting chemical, linked to serious health problems such as cancer, infertility, and early puberty, has invaded something we use every day. The chemical is Bisphenol-A (BPA), and that something is money. The Safer Chemicals Healthy Families Coalition (of which WVE is a part) and the Washington Toxics Coalition set out to track down the trail of BPA in our bodies and lives by testing cash register receipts (already shown to commonly contain BPA) and money in our wallets.

We collected receipts and dollar bills from a total of 20 states and Washington, DC and tested them for BPA. The results demonstrate that BPA, shown to raise hormonal havoc in both laboratory and human studies, has escaped from other products, most likely receipts, to contaminate our money supply.

1. About half of thermal paper receipts are made with large quantities of unbound BPA. We collected receipts made with thermal paper from 22 retailers in 10 states and Washington, DC. Laboratory tests found BPA in large quantities–up to 2.2.% of the total weight–in 11 of the 22 receipts. Since BPA use in thermal paper is not chemically bound, it is free and able to come off onto skin, money, and other objects.

2. BPA transfers easily from thermal paper receipts to human skin. In tests mimicking typical handling of receipts, BPA transferred from receipts to fingers. Just ten seconds of holding a receipt transferred up to 2.2. micrograms. Testers transferred much higher amounts, about 15 times as much, by rubbing receipts.

3. Unregulated use of hormone-disrupting BPA has contaminated our money supply. Since the BPA in thermal paper receipts is present in a powdery film, we suspected it could easily travel from those receipts to other objects. We tested 22 dollar bills and found BPA in 21 of 22 dollars tested. Because of its unregulated use, BPA now contaminates something virtually all of use every day: paper currency. It is very likely that BPA contaminates many other objects we use regularly. To the best of our knowledge, this is the first-ever test conducted to measure how much our paper currency is contaminated with BPA.

The BPA in receipts and on the money in our wallets is a direct result of the absurdly lax controls on chemicals in the United States. Half a century ago, paper makers found that they could make cheap paper that essentially contained its own ink, using a chemical already produced in large amounts. Thermal paper was born, and the chemical was BPA. Today, paper companies produce massive quantities of thermal paper for uses from gas station and grocery store receipts to medical papers and lottery tickets. That this contains–and releases–BPA has come as a surprise to most people who use receipts or medical papers. No label states the presence of BPA in thermal paper, and few would anticipate the chemical on paper currency.

Continual surprises regarding where chemicals are used constitute just one of the many problems with the federal law regulating chemicals, the Toxic Substances Control Act (TSCA), passed in 1976. TSCA gives the US Environmental Protection Agency (EPA) very limited authority to require safety testing of only a few hundred of the approximately 80,000 chemicals in commerce since 1976. Of that large number of chemicals, 62,000 were grandfathered under the law with no requirement for testing or safety assessment. Manufacturers introducing new chemicals after TSCA’s passage must notify EPA of the new chemical, but don’t have to test it for health and safety. Perhaps most importantly, nothing in the law ensures that chemicals in products are safe or that the safest alternatives are used.