Ahh, menstruation, that monthly ritual often marred by discomfort, inconvenience, and most fun of all — mood swings! For most women, once they find the menstrual products that meet their needs, they stick with them for a lifetime without giving them any further thought.

Unfortunately, there is more to tampons than one might expect. Women’s Voices for the Earth has been delving into the world of tampons and other feminine care products to better understand what they are made of, what toxic chemicals they may contain, and how they might be impacting our health.

The potential impact of toxic chemical exposure from tampons on health is significant, because they are worn internally, with direct contact to some of the most sensitive and absorptive skin on a woman’s body. And despite the widespread use of tampons by numerous women, relatively little research has been conducted to assess the health impacts of chemical exposure from these products.

Vaginal tissue is lined with permeable mucous membranes, which protect the body from bacteria, but which can also easily absorb or be irritated by other chemicals. Vaginal tissues are filled with blood vessels and thus have a near direct route for chemicals to be absorbed to your bloodstream. Studies have shown that hormone chemicals, like estrogen especially, will be absorbed vaginally at 10-80 times the rate that the same dose would be absorbed orally.[i] So there is a real concern about the potential for chemicals associated with tampons affecting women’s health.

What Is a Tampon Made Of?

Some manufacturers will disclose the main components of tampons, and the list usually looks something like this: “Rayon and/or cotton fiber, polyethylene overwrap, cotton cord, cardboard applicator.” This all sounds pretty simple and straightforward. What is left out of this description, however, are the other potential absorptive materials, additives, fragrances, and potential contaminants that can be found in tampons. Public patent documents held by these companies indicate a number of other chemicals they might be incorporating into tampons, but which are rarely, if ever, disclosed to the consumer.

Examples of other absorbent materials that may be used in tampons include:

Examples of additives that may be used in tampons include:

Scented tampons are infused with fragrance, which could be made up of combinations of any of nearly 3,000 different chemicals. Examples of potentially harmful chemicals that can be found in fragrance include: 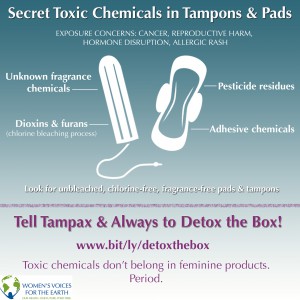 Pesticide residues have also been found to contaminate tampons made from traditionally grown cotton.[iv] These include pesticides such as Procymidon, which EPA has determined to be a “probable human carcinogen,” and piperonyl butoxide, which has been determined to be a “possible human carcinogen.” Unfortunately, there has been no research or attention to assessing the risk of exposure directly to vaginal tissue from these toxic chemicals. These results, while just a single study of one brand, generate valid concern about the potential for exposure to pesticides from tampons. More research is needed to determine how commonly pesticide residue is found in tampons, and what the health impacts of that exposure may be.

So how toxic are tampons? What we know about the chemicals used in them generate a true concern for women’s health. But unfortunately there are relatively few studies available looking at adverse health outcomes among women who use them. Given the widespread use of these products by women across their lifetime, increased scrutiny and attention are clearly needed.

Five things you can do now to protect your health from toxic tampons: