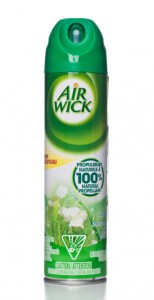 Parsippany, N.J.—, Reckitt Benckiser (RB) announced today that it would become the first major cleaning product company to disclose fragrance allergens in its U.S. products, a major step forward in breaking the secrecy around fragrance ingredients in household products. This announcement comes less than a year after NGO Women’s Voices for the Earth (WVE) released the report Secret Scents: How Hidden Fragrance Allergens Harm Public Health that found that tens of millions of people suffer from fragrance allergies. Consumers in the U.S. have virtually no way to avoid chemicals that trigger allergic reactions because federal laws don’t require ingredient disclosure.

Allergens will be disclosed online on product ingredient information pages at www.rbnainfo.com.

Reckitt Benckiser has been disclosing fragrance allergens in Europe for years for its household brands including Lysol, Woolite, and Air Wick. Today’s announcement means that American consumers will finally have the same access to ingredient information as European consumers.

“We applaud Reckitt Benckiser for its leadership in the industry and for finally providing consumers with the information they have been asking for,” said Erin Switalski, executive director at Women’s Voices for the Earth. “People want to know what ingredients are in their products so that they can avoid potentially harmful ingredients to protect their health and that of their families.”

“Increased transparency and disclosure are key components of RB’s better business strategy and we believe this is the right thing to do for U.S. consumers,” he said. “For over 10 years, we’ve actively reviewed our ingredient portfolio and have taken a proactive stance on disclosure, reduction and removal of chemicals of emerging concern.”

Most recently, WVE has highlighted SC Johnson & Son’s double standard of withholding ingredient information in the U.S. that is available to their E.U. consumers.

“We hope that SC Johnson will follow RB’s lead and increase fragrance ingredient disclosure,” Switalski said, noting the organization’s spoof website, www.whatsreallyinsidescjohnson.com, has led to more than 60,000 consumers urging the company to make this change.

RB’s announcement today also included the company’s commitment to removing triclosan from all of its U.S. products.

“Women’s Voices for the Earth has been calling for the removal of triclosan since the release of our Disinfectant Overkill report in 2009,” Switalski said. “Triclosan is an hormone disruptor that has been associated with an increased risk of breast cancer. We are so pleased that this toxic chemical will be removed from all RB products.”

Founded in 1995, Women’s Voices for the Earth amplifies women’s voices to eliminate toxic chemicals that harm our health and communities. With members across the United States and Canada, WVE changes corporate practices, holds government accountable, and works to ensure a toxic-free future for all. Learn more at www.womensvoices.org