Air freshener seems to be more and more prevalent in our society these days. One market analysis forecast that home fragrance sales would reach $6 billion by 2012. I was unable to find an exact sales number for last year, but I have no doubt that it’s a shockingly high number, given the staggering array of air freshening devices available in the supermarket aisle. Aerosols, sprays, candles, plug-ins, oils, time releasers, each with dozens of different scents to choose from – the options are almost overwhelming.

“So, what’s the problem with all these fragranced air fresheners?” you ask. THIS is the problem: fragrance can be made up of more than 100 chemicals, most of which are synthetic, and some of these chemicals are harming our health.

Take these alarming statistics, for example (which, I should note, are from only one of the many, many studies I could cite about the impact of fragrance chemicals on our health):

One study in the U.K. of 14,000 pregnant women showed a link between the use of air fresheners and aerosol sprays and an increase in headaches and depression in the mothers, as well as ear infections and diarrhea in their babies. In homes where air fresheners and aerosol sprays were used on most days, women experienced 25% more headaches and 19% more post-natal depression than women in homes where such products were used less than once a week. Babies under six months old who were exposed to air fresheners on most days had 30% more ear infections and a 22% greater chance of diarrhea than babies exposed less than once a week[1]. While it is not clear which chemicals (or which combination of chemicals) found in air fresheners may be responsible for these effects, the results of this study raise concern about the safety and necessity of these products.

Let me emphasize that frightening last sentence: We don’t know which chemicals are causing these serious health problems, or which products they’re in. That’s because most companies keep fragrance ingredients a secret with near-religious fervor. This is a big problem when it comes to air fresheners, in which fragrance can make up 70-80% of the overall composition of the product. That means we have no information on the vast majority of chemicals in the product we’re spraying in our homes. 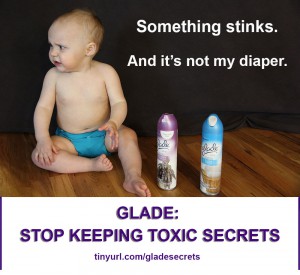 Let’s use a real-life example with an iconic product to illustrate this problem: Glade. Glade is a household name, offering some of the most popular air fresheners on the marketplace. But the makers of Glade keep fragrance ingredients a closely-guarded secret, so we have no idea what makes up that Clean Linen or Lavender & Vanilla scent.

Which is ironic, because SC Johnson, Glade’s parent company, can’t seem to emphasize enough how dedicated they are to “honesty” and “transparency.” Let me just share a few particularly juicy quotes with you:

“We know you value transparency, and we’re committed to sharing what’s inside our products.”

“Today’s families want to know what’s in the household cleaning and air freshening products they use in their homes.”

“That’s why we disclose all ingredients… So you know what you’re bringing into your home.”

Except when it comes to fragrance ingredients, apparently.

Here’s what the makers of Glade are willing to tell you. They released a master list of nearly 1,500 chemicals that they use in all of their fragranced products – but they don’t tell you which chemicals are in which products.

We had a feeling you wouldn’t want to wade through 1,500 chemicals, so we picked out a few choice chemicals on that giant, unwieldy list that we think you should know about:

But SC Johnson won’t tell us which products these chemicals are in? Seriously? WVE did a little of our own sleuthing work, and tested a couple of Glade products. We found synthetic musks and allergens, but we were only specifically testing for those chemicals, so who knows what else is hiding out in Glade.

Having something to hide seems to be the only reason companies don’t want to tell us exactly what’s in their fragrances, SCJ included. We know that companies have some pretty advanced technology that allows them to reverse engineer each others’ scents – so threats to intellectual property and trade secrets can’t really be the issue. And we know that there are companies like Seventh Generation that disclose all ingredients without any apparent negative impacts to business. So really – what are these other companies hiding?

We believe that we have a right to know what’s in the products we’re bringing into our homes, spraying in the air that we breathe, landing on the surfaces that we touch, and settling into the dust at our feet.

And we know that we’re not alone in this belief – a study just came out last month called Thinking Consumption: Consumers and the Future of Sustainability, and the headlining find on the study was that consumers rank ingredient transparency among the most important issues for brands:

Nearly 9 in 10 consumers globally (86%) say “ingredient transparency is extremely important or very important” for companies to address as part of their products, services, or operations, including 88% of consumers in emerging markets and 84% of consumers in developed markets.

Guess who sponsored this study, among other companies? SC Johnson, makers of Glade!

Seems like SCJ should take the advice that they themselves asked for – don’t you think?

And this study isn’t the only evidence that their consumers want them to come clean on fragrance ingredients. Since WVE launched our Glade: Stop Keeping Toxic Secrets campaign, thousands of people have called on SCJ to list all fragrance chemicals through direct emails and on social media.

Join our Glade: Stop Keeping Toxic Secrets campaign on Facebook or by emailing the company here.

In the meantime, there are lots of alternatives to air fresheners and fragranced cleaning products – check out some our ideas.